This makes me feel all warm and happy. His little face!

Someone asked me to post my Blue Monday again so here it is. #bluemonday #neworder pic.twitter.com/ue0gUJiJKJ

I’ve been getting into First Aid Kit on the advice/orders of my wife and am pretty much obsessed with this song. I mean, come ON.

Very excited to note that Trivia was just recommended in the New York Times. Fingers crossed this will lead to RTÉ going back in time and uncancelling it. Link here.

This is one of the funniest things I’ve ever read.

My new book Married to a Cave Man is out now. Here’s an Amazon link. And here are some early reviews on Goodreads.

Covers are important for books. They hold the pages together. They tell you what the thing’s called and who wrote it. They usually have some sort of picture that- … damn, I’m no good at this. Lookit: my new book has a cover. Here it is. Will be published just before Christmas.

My novel Married to a Cave Man is coming out soon. Starting Monday 20th November, it’s being serialised on The Pigeonhole, which is a sort of online book club. First subscribers get the whole thing for free, which is pretty cheap. Here’s a link. And to make this post more attractive, here’s an adorable puppy.

Hey, look who I bumped into. It’s only David Pearse and Janet Moran out of Trivia. Well, I didn’t so much ‘bump into them’ as go see them starring as Molly and Leopold Bloom in the Abbey’s production of Ulysses. They were magnificent, as usual. Sigh. 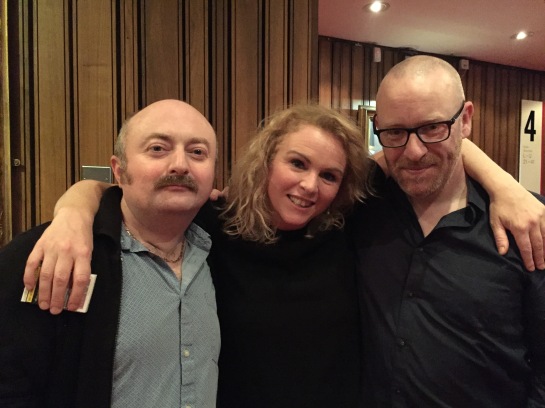